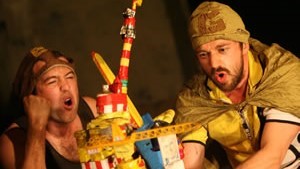 Conceived and directed by Christian Leavesley and Phil Rolfe, the story of Gilgamesh is made anew by strong, fascinating and amusing performances by an ensemble of three performers: Richard Pyros, Katherine Tonkin and Mark Tregonning. Originally developed by the collective of Uncle Semolina, the Opera House Studio is the final stop amid a string of nomadic performance across the world. The audience are in very capable safe hands, as the story travels through a landscape of part myth, part here, part somewhere else. Uncle Semolina’s Gilgamesh channels the spirit of a an ancient story, the skills of a commedia déll'Arte troupe, Grotowski’s Poor Theatre, Playschool and our own childhood imagination where anything is possible.

Sweetly scraping at mud in a giant dirty sandbox and eyeballing the path of the trucks and the toys as they grind them into the dirt, are three performers. One has a beard. One is a woman. One is playing with a toy horse.

Surrounding them is a wooden frame: not so large. In fact this is a small play pen for the space they have been offered. The Studio has what seems to be a large floor… and plenty of room for a large set… plenty of space for running around… for jumping… but no. These performers don’t take more than they need and are neatly contained within the sides of this box, even though at times sand and toys and figurines are flung afar. They are playing with toys that are convincingly filthy… not through a pretensious aesthetic “designer dirt", but through the work of rehearsals and performances of this piece which has lead them here. This is simple. This is real. This doesn’t hide anything. No one leaves the stage. No scuttling black clothed stage managers tidying up or positioning things: Rolfe and Leavelsey have set it all up perfectly, they made the set, designed the lights, developed the piece. DIY theatre at it’s best. Three performers working hard, having fun, telling us a story.

The charm of this piece is the bright and enthusiastic performers: the playfulness and the engagement of children. The joy of exploration and expanding a joke (especially a fart joke) into the stratosphere. The open mouth staring (that happens, when as a child, you are skilfully crafting a place for a car in the dirt) not only appears on stage but as you watch them unfolding a story.

Playing as children and speaking as adults and switching between the two is effortless and authentic and the spatial relationship is genius. The actors control, instruct, talk to and with and manipulate toys into action as do the hand of the gods in orchestrating and controlling our fate. As children lord their whims and giant empowerment over the inanimate objects. As politicians play with the lives of soldiers and citizens.

From the get-go this is a loud fusion of light, sound, voice, soundtrack, inter-textual references, cultural signifiers. There is hip hop, rhythm, snippets of songs, beat boxing, the live Foley of footsteps, underscoring, melodic references and gospel singing. There is noise of voice, or dirt splashing against the sides of the sandpit, of the sound effects make by a child depicting explosions or fist fights. There are tinny noises from a plastic guitar and a battery operated chainsaw.

There is light that shows, that shadows and haunts. There is light that flickers and follows, pulses and disappears. Light that inverts like a negative photographic image and disappears. You think you know this story, don’t need to see it again? You are wrong. You haven’t seen THIS story… Gilgamesh is a wonderfully refreshing experience: theatre at is most visceral, raw, unpretentious and unrepenting. It’s funny. It’s surprising. I urge you to book your ticket early, coz if Sydney knows what is good for it, this will sell out in no time.