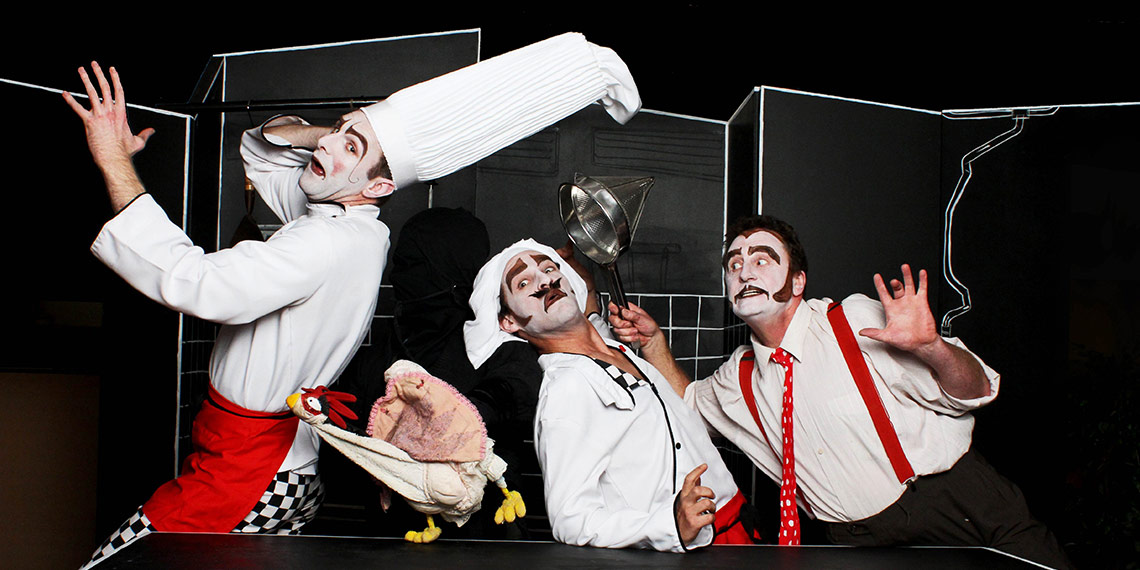 The Magic Chicken is a critically and commercially successful non-lingual family show. Made with high production values, virtuosic performers and professional dedication, The Magic Chicken is a slapstick treat of culinary chaos: two underlectual chefs in a Seussian kitchen mixing up a hilarious concoction of punk-mime physical comedy, live foley and ninja-puppetry.

Theatre Beating is an award-winning production and creative company formed in 2003 by Barnie Duncan, Trygve Wakenshaw and Geoff Pinfield, all experienced producers, directors and performers.

'Perfectly aimed at its young audience'

“The Magic Chicken is a delectable school holiday treat from New Zealand’s Theatre Beating. It’s a 50-minute roller-coaster of slapstick, clowning, mime and physical theatre, and terrific puppetry. The piece is perfectly aimed at its young audience, who lapped up the kicks in the pants, wallops with rolling pins and sieves on the head — not to mention an enormous amount of flour, water and all the ingredients for pizza, flying liberally into the audience, to wild squeals of delight.”  The Advertiser, 23 April 2014

'A Treat The Whole Family Will Enjoy'

“A perfect combination of slapstick, panto and mime to the very well-timed music... They create theatrical magic where every adult and child in the audience laugh hysterically for the entire show. Here are a group of talented people proving they can produce good, old-fashioned entertainment without speaking. And, those looking for something special to entertain the kids, with the school holidays nearing their end, will find this is an affordable treat the whole family will enjoy.” Jane Savage, Global Media Post, 23 April 2014

“The Magic Chicken is an exceptionally fine theatre work. You won't see anything better anywhere.”