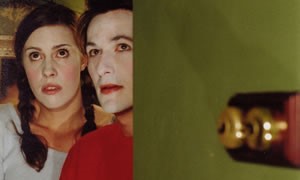 The Eisteddfod by Stuck Pigs Squealing

The Eisteddfod opens with Lally Katz (writer) providing a short narrative that introduces the protagonists, Abalone (Luke Mullins), Gerture (Katherine Tonkin) and their situation; the siblings were born into a house torn asunder by adultery and when their parents are both killed in a tragic pruning incident the children begin to withdraw from society and construct their own lives, fulfilling their growing adult desires with role-play and fantasy. Abalone dreams of winning the local eisteddfod with all the associated glory, while his sister Gerture slowly slips away into her own private world where she works as a teacher. Afraid of being left alone Abalone offers Gerture a supporting roll in his solo production of Macbeth for this years eisteddfod, but are either of them ready to face reality?

Both Mullins and Tonkin deliver outstanding performances, not only nailing the fragile subjects of Abalone and Gerture but also showing great versatility through the varied roles they take on as the characters of Abalone and Gerture’s fantasies. One moment they’re reminiscing together about their childhood, the next performing Macbeth, the next re-enacting scenes between Gerture and her lover. Each change is seamless and at no point was I confused as to who or what I was watching. All of this is complemented by Chris Kohn’s astute direction whereby Katz’s sharp dialogue and deliciously black script are brought to life.

The whole production is as tight as Costello at the end of the financial year, but far more satisfactory. The opening night audience chortled at Abalone and Gerture’s idiosyncratic flaws only to be left gasping at real tragedy of their situation. Kohn has directed his cast like a conductor would a symphony with crescendos and diminuendos placed exactly where the score demands. The more of Katz’s writing I experience the more I like her style and if this production is anything to go by I would love to see more from Stuck Pigs Squealing. This is a magnificent display of contemporary Australian theatre and should not be missed by anyone.