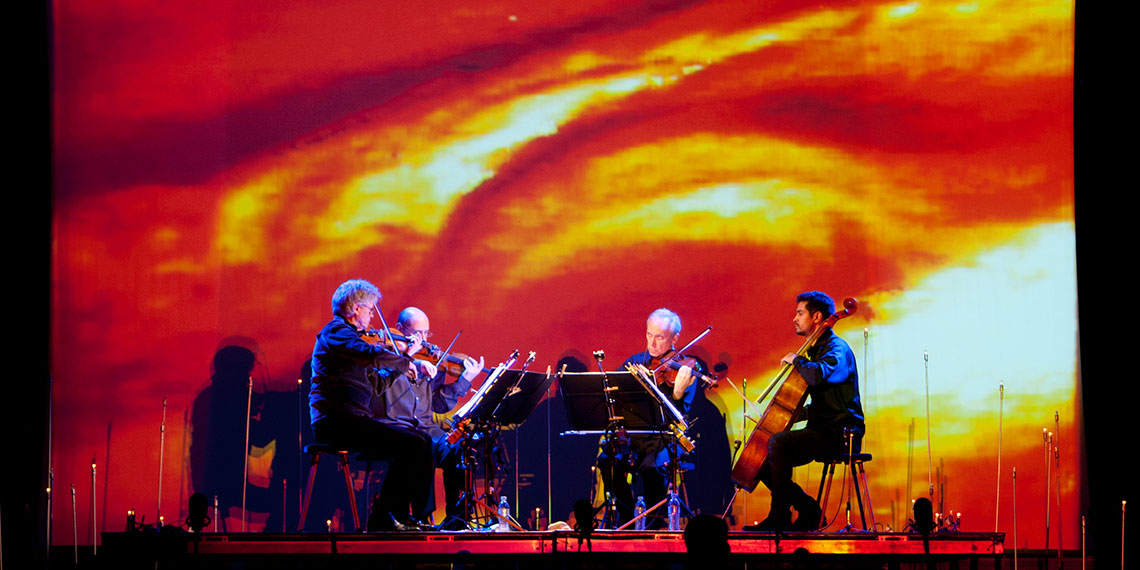 A transcendent, visually spectacular musical odyssey into the farthest reaches of the Solar System.

The Kronos Quartet, one of the most esteemed string quartets in the world, presents the Australian debut of its highly acclaimed Sun Rings. An artistic commission by NASA, and a collaboration between Kronos, composer Terry Riley and visual designer/director Willie Williams, Sun Rings is a majestic amalgam of chamber music, hypnotic visuals and the ethereal 'whistles' of deep space, as recorded and transmitted by the Voyager spacecraft.

Across ten movements - or 'spacescapes' - Sun Rings soars through the outermost limits of our understanding of the universe: the whirrs and clicks of electrons flaring against the atmosphere of Jupiter are woven together with a score of creeping strings and an undulating live chorus of voices, while flickering images of the astral landscape tremble across a vast backdrop. Ghostly and beautiful, this is music as scientific exploration - a stately, captivating waltz into the boundaries of known space.

Vast in scope and precise in execution, Sun Rings is one of the Kronos Quartet's most acclaimed and enduring endeavours. It promises to be one of the most remarkable events at this year's Festival.

As part of the Melbourne Festival, Kronos will also be presenting one exclusive concert showcasing the depth and diversity of a creative vision unparalleled in modern music. Among the Australian premieres at this concert will be Steve Reich’s WTC 9/11 – a dissonant, propulsive meditation on the 2011 World Trade Centre catastrophe that incorporates the voices of defence and fire department personnel recorded during the attack.

"A masterpiece… rich, lyrical and breath-stopping."

"A major, moving work… art and science have enjoyed a triumphant meeting."