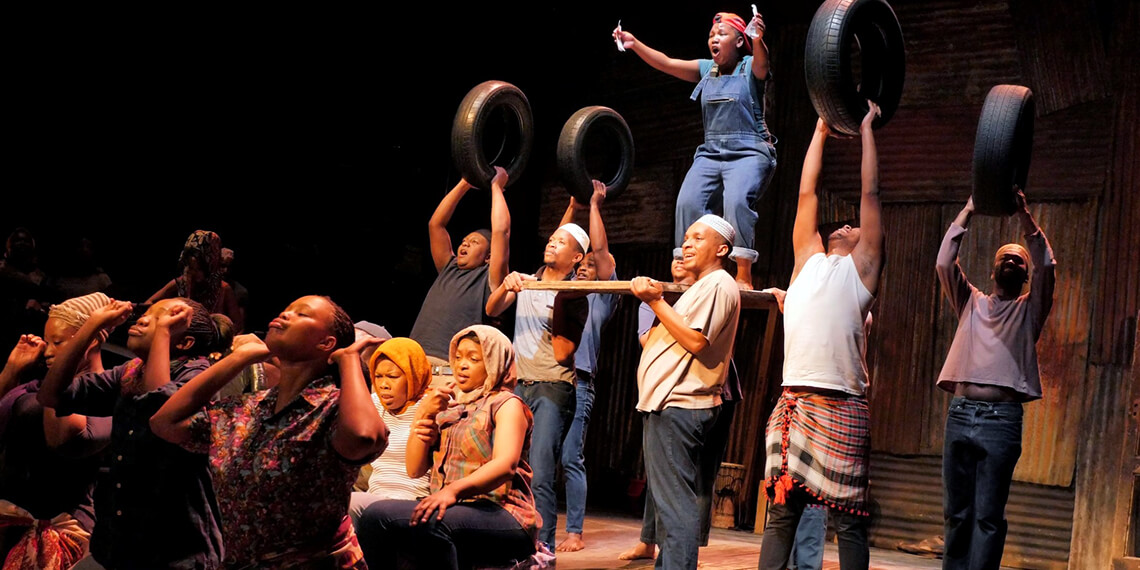 A Man Of Good Hope

Based on the book by Jonny Steinberg, adapted by Isango Ensemble
Music composed by Mandisi Dyantyis with the Ensemble
Co-produced by The Royal Opera, Repons, BAM and Les Théâtres de la Ville de Luxembourg

An exhilarating piece of music theatre, bursting with life, by the award-winning Isango Ensemble. This epic story, traversing the African continent, unfolds with joyous ensemble singing and roof-raising marimba, djembe drum and dance. Be uplifted and inspired by this spellbinding musical theatre triumph!

Escaping the ravages of civil war, eight-year-old Asad is a street smart survivor. Hustling his way from a refugee camp to the shantytowns of Ethiopia, Asad sets his sights on the bright lights of South Africa. But the tough reality of this promised land sends our resilient hero on a whole new, perilous adventure.

Energised by the joyous sounds and swagger of one-of-a-kind South African company Isango Ensemble, working in collaboration with the UK’s Young Vic, A Man of Good Hope is a musical theatre spectacle pulsing with the most urgent humanitarian crisis facing the world today. Critically acclaimed in London and New York, it’s a powerful and hopeful odyssey of forced migration, stunningly expressed by an electrifying cast of performers whose dynamic song and dance, accompanied by marimba and steeped in African tradition, will make your heart swell and your spine tingle.

Take an epic journey through Africa with this extraordinary true story, brought to life by the most irresistible music.

A Man of Good Hope is a co-production between London’s powerhouse Young Vic Theatre and internationally acclaimed Cape Town-based Isango Ensemble together with Royal Opera, Répons Foundation, BAM and Les Théâtres de la Ville de Luxembourg. Isango founded in 2000 by Mark Dornford-May and Pauline Malefane and drawing its performers from the previously disadvantaged townships surrounding the city, creates performances with a strong South African flavour by re-imagining Western theatre classics within a South African setting and by creating new work reflecting South African heritage. Isango has won international fame for its adaptations of The Mysteries and classic operas such as the Golden Bear-winning feature film uCarmen eKhayelitsha and Olivier Award-winning The Magic Flute (Impempe Yomlingo), in a contemporary South African township setting.

“Bursting with life, warts and all, this is a full-blooded hymn to that most fragile of human qualities: hope.” ★★★★★

“A powerful testament to the resilience of humanity” ★★★★

“Burns bright with humanity and hope. A brilliantly vibrant evening.”

"Halfway between a Brechtian fable and a pop opera, it says a lot about human endurance and demonstrates the company’s exhilarating virtuosity." ★★★★

"While there is little left of the hope that has helped Asad’s survival, it is still there: it is so obvious in the Isango Ensemble. It got them a well-earned standing ovation."

"Part play, part opera, part musical, it is a piece that makes up its identity as it goes along, mirroring the reinventions of its hero."

"This is a glorious, vibrant piece of musical theatre – and one that speaks to the biggest concern of our age." ★★★★

"What an extraordinary piece of theatre this is, an African musical saga, for want of a better label, Asad’s story of his journey from Somalia to Kenya then to the fabled wealth of South Africa (“Gold! “money”!) then onward still to the land of milk and honey that is America. Oh the optimism, the pragmatism, the violence and, frankly, sheer insanity of it all." ★★★★

"The piece does qualify as an opera because, if that term can be applied to works as different in style as those of Handel and Shostakovich, then it can cover this too."